The Wever breathes history. This location and characteristic villa has been a small-scale hotel since 1934. What began as Pension de Wever has, after 87 years, been lovingly restored into the Wever Lodge in 2021. While the hotel has changed purpose and names numerous times through the years, much has also remained the same. 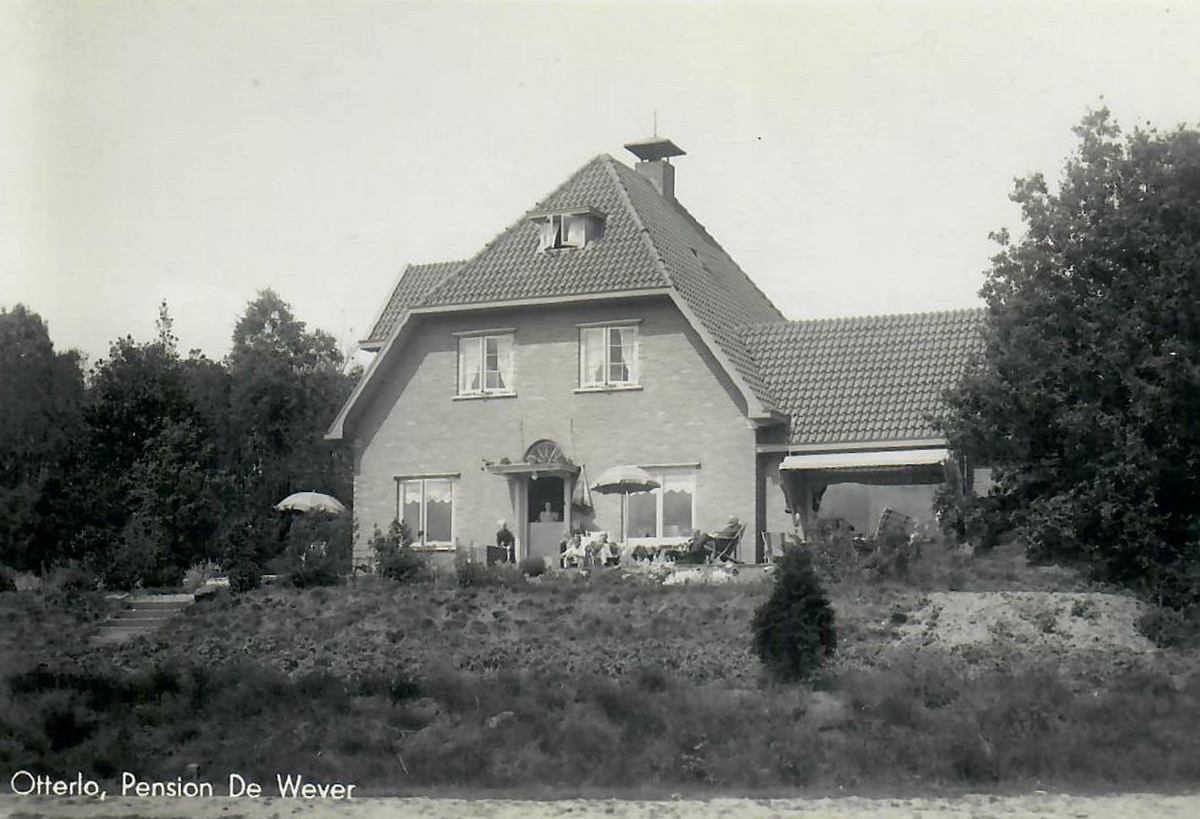 1934 – It was 1934 when the first brick of Pension de Wever was laid. The client was Jan Lieftink. He had a stately villa built on a hill offering a beautiful view of the large heath stretching out beneath it. His idea was that well-off families could enjoy their holidays here. Chic men and women from across the country travelled to the pension in Otterlo. They often arrived lightly packed and without baggage: in this period, it was customary to send your suitcases ahead per carriage. The guests of Pension de Wever came for the nature, to eat well, sleep well and specially to rest. 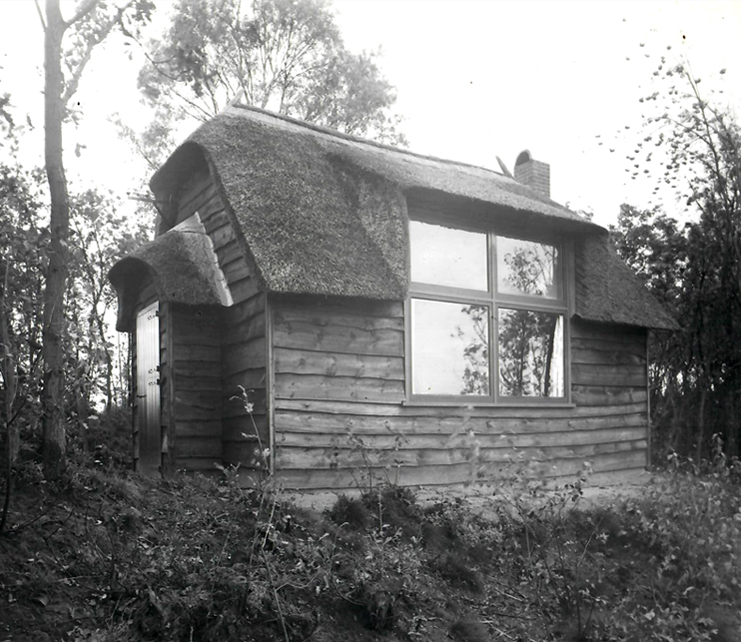 1942 – A small cottage was built next to Pension de Wever in 1942. This became the studio of Willy Auping, conservator and later acting director of the Kroller-Muller Museum. He enjoyed painting and especially at this spot with the view of the vast heath. The studio was later expanded with a second cottage. Both authentic structures are still standing and have been repurposed as the guesthouses of the Wever lodge. 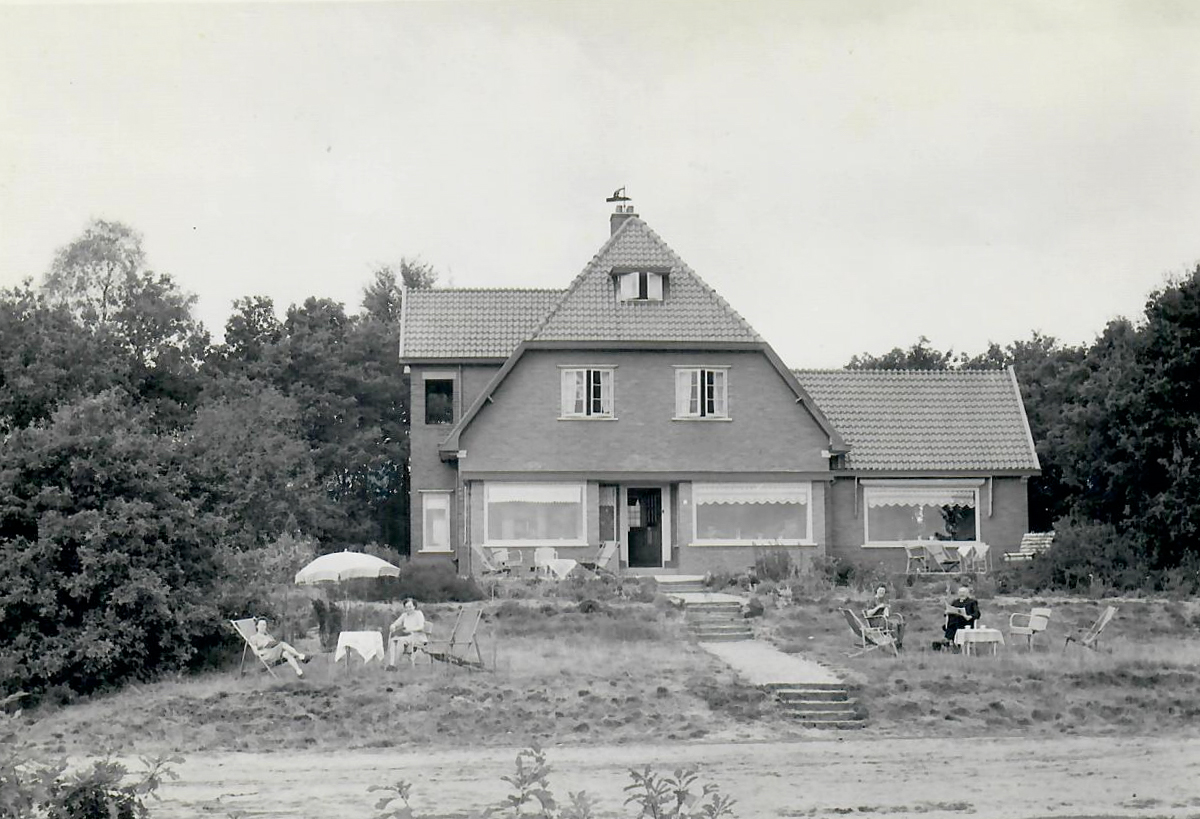 1955 – More and more guests were discovering Pension de Wever. The ‘foreigners,’ as they were referred to at the time by locals, came namely for the nature of the National Park De Hoge Veluwe, the Kröller-Müller Museum (opened in 1939) and the hunting lodge St. Hubertus. As guests of the pension, they could participate in activities organised in the area such as ‘a wild journey through the Hoge Veluwe guided by a gamekeeper’ or one of the concerts in the music tent in Otterlo. At the end of the day guests settled into one of the chairs on the terrace for a bite and a drink. Not much has changed in the last 87 years … 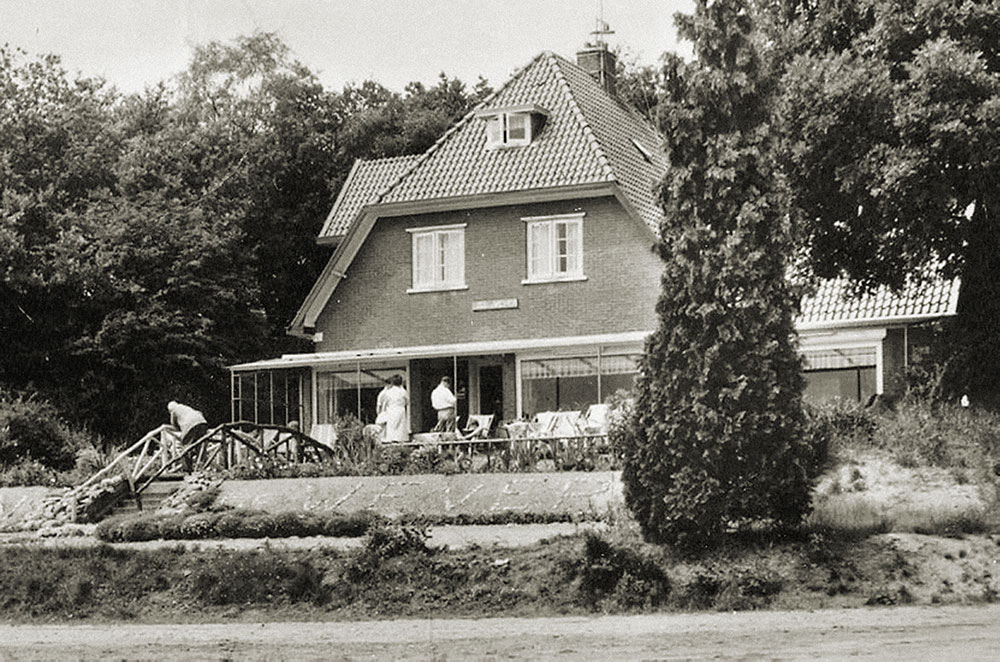 1958 – In 1958 Annie Bakker-Lieftink took over the pension from her father Jan and renamed it Hotel Pension de Wever. A brochure from the time shows that the pension now had running water, a bathroom and electricity. There were ten rooms with two beds and a shared living room known as room 1. Guests lacked nothing. Luggage was still sent ahead to the Wever, usually by post or train. If guests wanted to order something they simply pushed a button and a bell alerted the Bakker family. The bell system still hangs in the lodge but no longer rings. The cosy and relaxed ‘living room’ atmosphere that originated in this time period has also remained. And there is still no hotel room number 1. 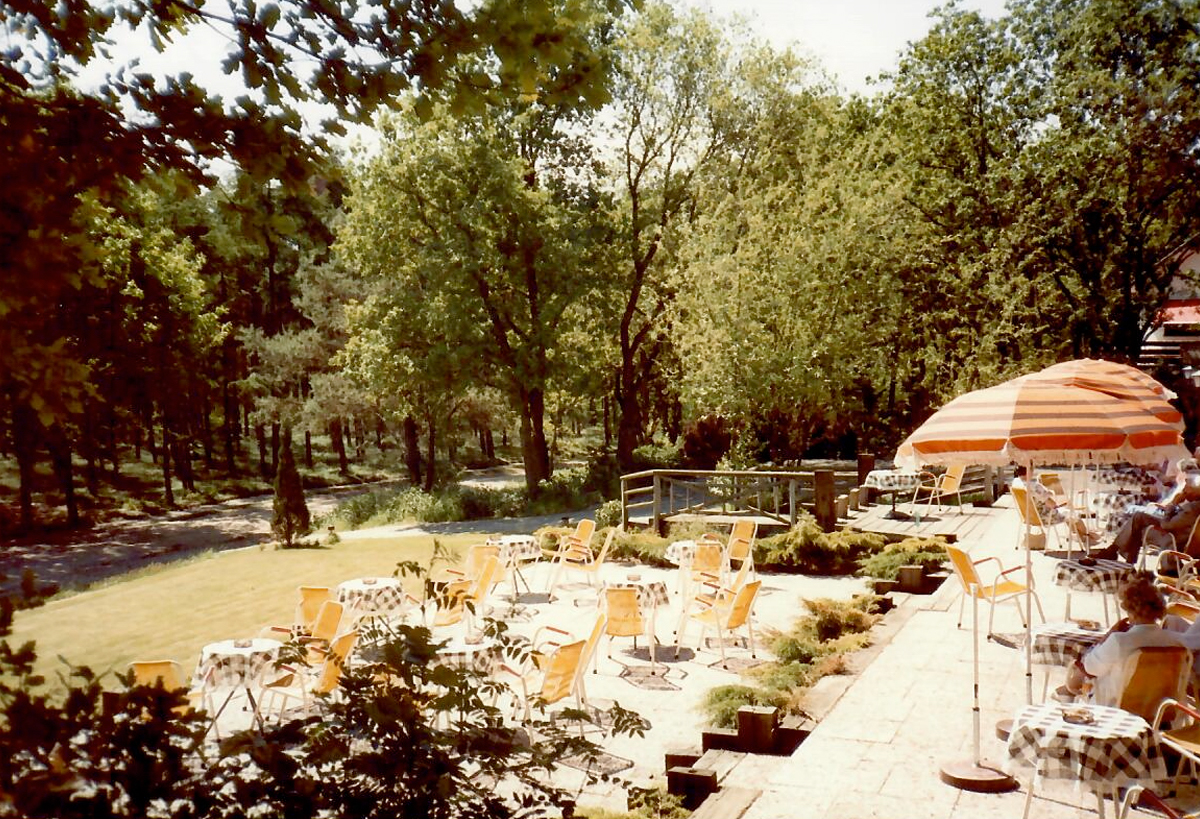 1984 – The Bakker family had waived its sceptre for some 25 years. In the last period the hotel pension had gone through significant modernisation and now had twelve two-person rooms, the majority of which had its own shower and toilet. In the period guests paid 35 guilders for accommodation and breakfast, roughly 15.88 euros. There were also considerable changes to the garden. The pond in front of the terrace disappeared and the terrace doubled in size. It still offered the magnificent view that drew guests to Otterlo. Many guests happily returned and felt at home here. That was clear when regulars enthusiastically celebrated the fiftieth anniversary of Pension de Wever and the Bakkers with numerous songs. 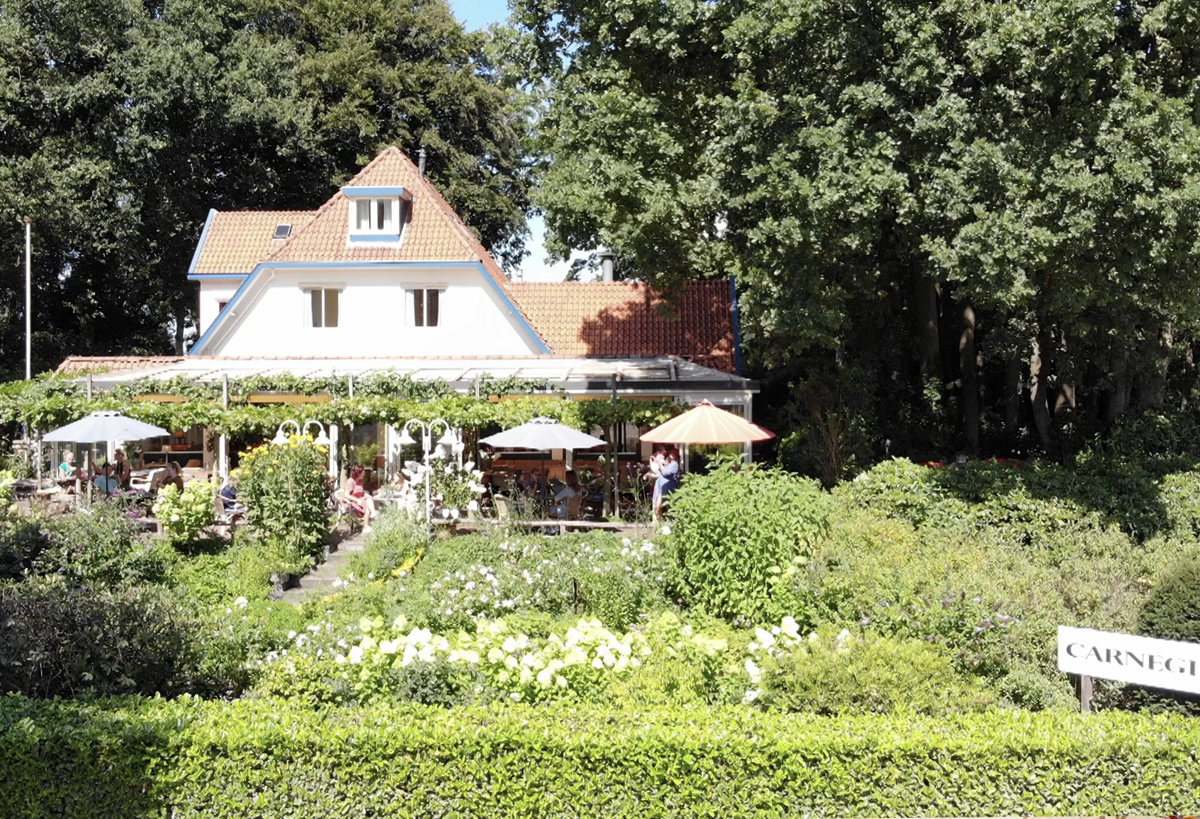 1992 – After selling his Carnegie hotel in Arnhem, Ruud Heinsius became the proud new owner of Hotel Pension de Wever in 1992. With a wink to his old establishment, he gave Hotel Pension de Wever a new name: Carnegie Cottage. Not only the name changed, the interior was also thoroughly renovated. Together with his daughter Margot Schimmel-Heinsisus and her husband Dick Schimmel, who manned the kitchen as chef, Ruud Heinsius created a homey English atmosphere. Guests were enthusiastic and in 1998 Carnegie Cottage was crowned with the title ‘The nicest hotel in the Netherlands.’ After his death, Margot, Dick and their daughter Celine continued Ruud’s legacy for many years. 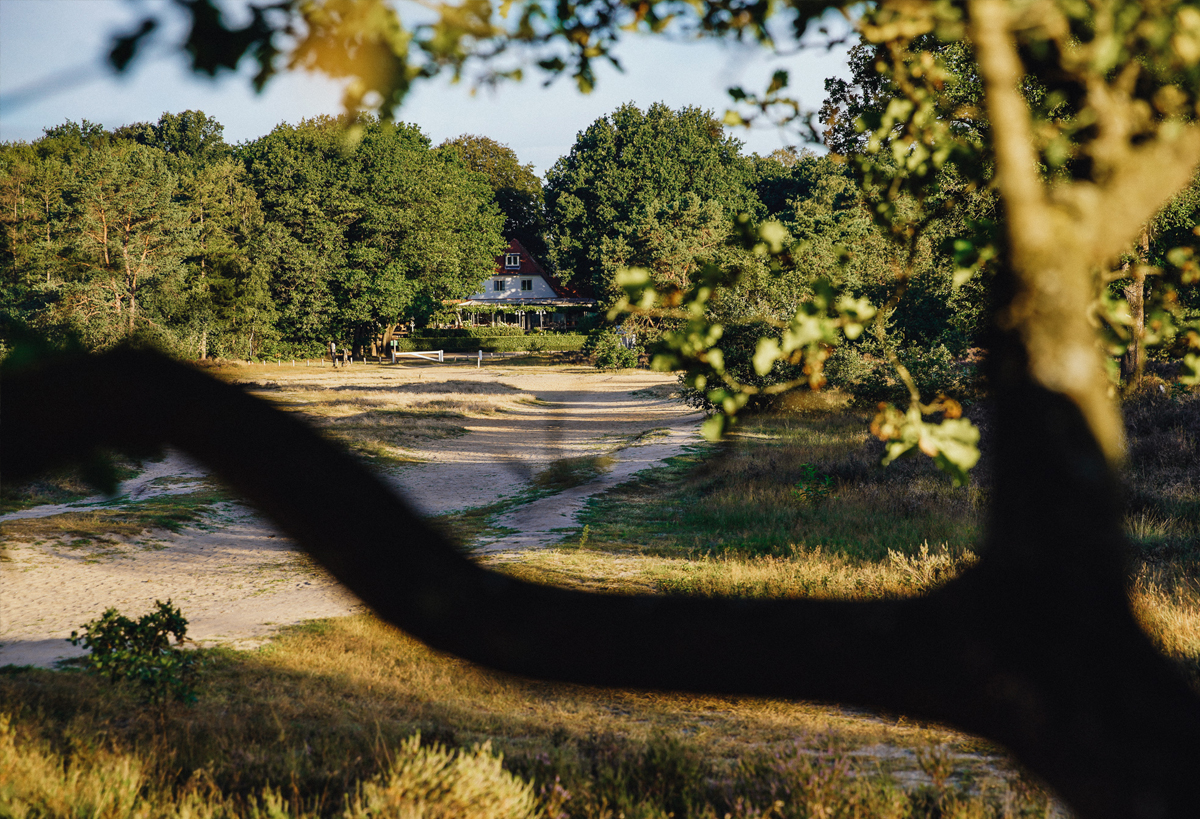 2021 – Good food, a good bed and rest. Starting in 1934 this is why guests came to Hotel Pension de Wever, and later Carnegie Cottage. And this is no different almost ninety years later. We’ve just brought back the original name. We look forward to welcoming you to Wever Lodge!

This website uses cookies to improve your experience as you navigate the website. Out of these, the cookies that are categorized as necessary are stored on your browser as they are essential for the functioning of basic functionalities of the website. We also use third-party cookies that help us analyze and understand how you use this website. These cookies are only stored in your browser with your consent. You also have the option to opt out of these cookies. But opting out of some of these cookies may affect your browsing experience.
Necessary Always Enabled
Necessary cookies are absolutely essential for the website to function properly. This category only includes cookies that ensures basic functionalities and security features of the website. These cookies do not store any personal information.
Non-necessary
Any cookies that may not be particularly necessary for the website to function and is used specifically to collect user personal data via analytics, ads, other embedded contents are termed as non-necessary cookies. It is mandatory to procure user consent prior to running these cookies on your website.
SAVE & ACCEPT